When you love Analog equipment, there comes a time when your 2 channel audio interface doesn’t cut it anymore. If you’re tired of patching cables all the time or if you want to record more than one instrument at once, it might be a good idea to expand your setup. In this article, I will talk about the ‘best’ multitrack recording setup that will give you lots of options for feature expansions, and all that without spending a ton of cash!

Most musicians start out with an audio interface from the likes of Focusrite, Presonus, UAD, Tascam or whatever, and these interfaces come bundled with a whole range of options that will definitely get you started. However, these interfaces usually provide few to no options for upgrading your channel count.

During the last couple of years, I’ve been upgrading my studio with various synths and outboard effects units that will eat up channels rather quickly, especially drum computers with individual outputs. I needed a solution that would allow me to upgrade the number of channels on my interface without spending lots of cash from the start.

My solution was to invest in the Digiface USB by RME. The Digiface is an audio interface with 4 ADAT inputs and outputs. ADAT uses fiberglass cables that carry up to 8 separate channels of audio, having 4 would result in a total number of 32 inputs and 32 outputs. Certainly enough for my setup!

Now, of course, only a Digiface wouldn’t get you very far. On the other end of the ADAT cable, you would need an AD/DA converter. All this unit does is convert analog, line-level, signals into digital 1’s and 0’s or the other way around.

In your traditional audio interface, the converter is usually embedded inside, in addition to microphone preamplifiers. So, why opt for an individual setup when you can easily invest in one single audio interface that does it all? Well, the reason is flexibility.

With this Digiface setup, you are not bound to a single converter. You can pick and choose the converters of your liking. You don’t even have to stick to a single brand. I started out with a single Behringer ADA8200 interface, which not only provides 8 line inputs and outputs, it also features 8 mic preamps. This combination must be the cheapest option to create a multitrack recording setup.

What I really like about RME is their Total Mix software. Totalmix allows you to route every input to whatever output you want as if you had a 32-channel mixer with 32 aux sends. You can even loop back channels in order to easily record outputs back into your DAW, so you can sample from YouTube or record tutorial video’s as I do. All RME hardware is supported for years and their drivers are the most stable I’ve ever seen on both Mac and Windows.

When my hardware collection expanded, I soon added another converter, this time it was a used Focusrite Octopre with built-in compressors. Great for recording an acoustic drum kit or electronic drum computer. My last expansion was the amazing-sounding Ferrofish Pulse-16 which has 16 line inputs and outputs.

The Ferrofish doesn’t have mic preamps, though, but that’s exactly why I picked it. I already had a 32-channel analog mixing console with built-in preamps, and I now had the flexibility of selecting other external preamplifiers as well! But even if I didn’t have an external mixer, there would be no issues in connecting a synth or any other line-level signal directly into a converter. The Ferrofish still features input & output gain controls.

Depending on the size of your studio, 32 channels may seem like overkill. But having plenty of options for upgrading your multitrack recording setup doesn’t hurt at all. And if you’re one of those gear collectors who thinks that 32 channels are not enough, another option would be to choose an RME Madiface, which gives a total of 128 input and output channels.

MADI is similar to ADAT as it uses fiber optic cables as well, but the two aren’t compatible with each other. So this is the only choice you have to make from the start. Luckily, the Ferrofish Pulse can be expanded with MADI inputs and outputs, which makes it even more feature-proof.

What do you think about this multitrack recording setup?

Let me know what you think about this setup by leaving a comment down below. Or, if you have any questions, just email me and I’ll reply as soon as possible. Don’t forget to subscribe to stay updated with all kinds of music production-related articles, videos, and more! 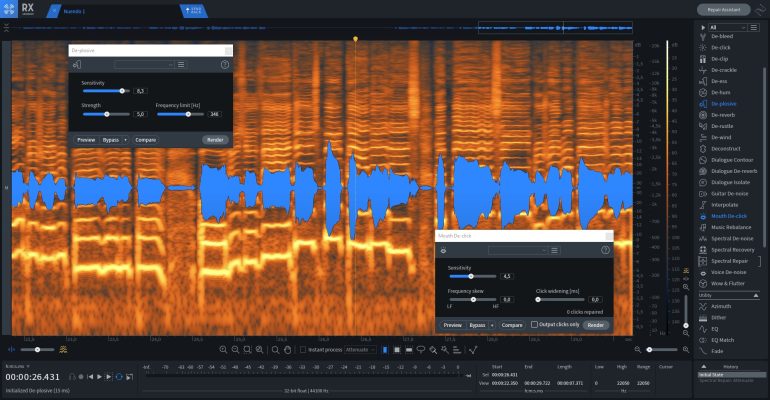 Photoshop for Audio with Izotope RX